Looking for products that offer support when you're suffering from Raynaud's Disease? In our webshop you'll find a wide assortment of medical aids. Feel free to read on for additional information.

Your shopping cart is empty.

Chat now Email us
Recommended by our Medical Team

The BonnySilver Diabetic Silver Socks are specifically designed for diabetes patients and contribute to quicker healing of wounds and improved blood circulation. In addition, the silver socks have an anti-bacterial effect, preventing nasty smel...
29%
Discount

The BonnySilver Diabetic Silver Socks are specifically designed for diabetes patients and contribute to quicker healing of wounds and improved blood circulation. In addition, the silver socks have an anti-bacterial effect, preventing nasty smel...
29%
Discount 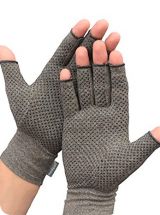 The Raynaud's Disease Gloves have been designed by specialists, specifically for R...
46%
Discount 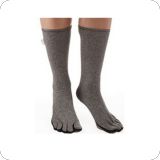 Raynaud's Disease Socks have been specifically designed for Raynau...
51%
Discount

What is Raynaud's Disease?

Raynaud's Disease can cause sudden discolouration in the fingers and/or toes. Within this discolouration, there are 3 different phases. This is why Raynaud's is also called the ''tri-color syndrome''. Usually it starts with a white discoloration, this is due to the contracting blood vessels, which results in the blood not properly being transmitted to the skin. This is usually followed by the purple / dark blue discoloration, because the blood in the blood vessels does not flow properly. Finally, there will be a red colour due to the increased blood flow. This last phase of discoloration can last a whole lot longer and may be accompanied by wounds on the fingers or toes.

Raynaud's Disease can come in two forms, which are:

With this form, the vascular cramps and discolorations usually occur simultaneously in both hands. Sometimes complaints are also experienced in the toes or the tip of the nose. An attack can be caused by:

The secundary form of Raynaud's can be the result of a disease with abnormalities in the vascular wall. Examples of those diseases are, Scleroderma, Rheumatoid Arthritis or Sjögren Syndrome. Certain medicines, such as beta-blockers can also cause this secundary form.

With this secundary form, there are often permanent abnormalities to the capillaries in the fingertips or toes. The attacks are similar to those in the primary form. The difference with the secundary form is that the attacks do not occur to both hands or feet at the same time.

The most common symptoms of Raynaud's Disease are:

Most complaints limit themselves to the hand and feet, though they often occur in the tip of the nose and the earlobes as well.

Treatment for this disease isn't always necessary. The following practical tips can contribute to the prevention of these annoying complaints.

With the first tip, Podobrace can help you. In our assortment you'll find gloves and socks that will offer you compression and therefore stimulate the blood circulation. This stimulation can ease the pains caused by Raynaud's Disease.